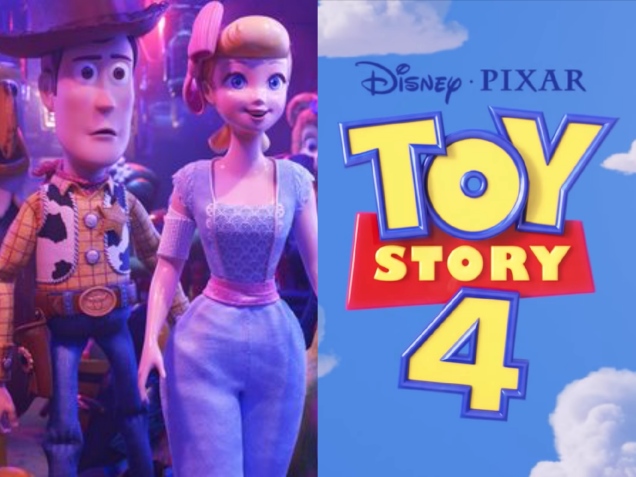 Today, thanks to an article published by the LA Times, we’ve got a new screen shot from Toy Story 4, as well as some remarks from Director Josh Cooley, Screenwriter Stephany Folsom, and the voice of Bo Peep, Annie Potts.  These join a couple other images that have come out in the past few weeks.

The newest image – included with today’s article – shows another angle of a party inside a pinball machine at the antique store, which is named Second Chance Antiques.  This is a scene we saw previously in the first full trailer and another movie still released since.  It doesn’t really reveal anything new, but it’s always nice to see something even just slightly different.

The article does provide some great insight from those involved with the making of the film.  Annie Potts – Bo Peep herself – spoke about her character’s return:

“John Lasseter called me and said, ‘There was a reason you weren’t in 3, and this is it.’  So I said [crying], ‘Well, you should have called me and told me that sooner!’  Anyway, she’s back… with a vengeance.  She’s gotten all wise and courageous.  She is a fierce warrior.”

Josh Cooley also revealed that Toy Story 4 was planned almost in conjunction with Toy Story 3 – which corroborates what Annie Potts said in an earlier interview.

“I’ll tell you what I do know; when Andrew Stanton wrote the treatment for Toy Story 3, he started writing the treatment for 4 soon after.  So it was always an idea to continue.  In 3, there’s this great moment where someone references Bo Peep as someone they’d lost along the way.  The animation on Woody’s face is amazing.  There’s a lot of emotion when he says, ‘Yeah yeah yeah, even Bo.’  We wanted to answer that question, ‘What did happen to her?’”

He also describes who Bo has become over the intervening years:

“[Bo is someone] who can stand up for herself, has confidence, and has seen a lot of things, has lived through it.  She’s more well-rounded.  We looked at different kinds of female characters.  [Mad Max: Fury Road’s Imperator] Furiosa.  Rey from Star Wars.  Marion from Indiana Jones is a huge one as well, especially because they have that relationship in Raiders.  Also, Ilsa from Casablanca.”

Stephany Folsom continued those thoughts, with her own comments about Bo:

“There’s something different [from those heroines] about Bo:  She’s a porcelain doll.  There’s a vulnerability there.  There’s something beautiful about having a character who is that vulnerable but she has all that strength she found in herself.”

“She’s the smallest toy that has ever been in a ‘Toy Story’ movie.  She has a personality that cannot be contained.”

And brings up Forky as well:

“Forky never wanted to come into being.  He’s having an existential crisis.”

Cooley expanded upon Forky’s role in the film:

“The heart of Forky — you just fall in love with him, partly because of his innocence.  Tony does that so well.  Forky had to be innocent enough to ask these genuine questions that force Woody to go deeper within his own self to answer.  He also has never seen Toy Story 1, 2 or 3, so he doesn’t understand any of the rules of this world and can be a wild card.”

He also dug deeper into the character of Duke Caboom:

“[He’s] this bravado stunt man who, under the thin surface, has real emotional problems.  That emotional truth of not living up to the expectations put upon you, but also going from super-confident to crying like a baby, that just makes me laugh.”

“We went for a walk around the campus and he was asking all these amazing questions about the character.  He was diving so deep — ‘It’s not just a joke; something is driving him.  Where is this coming from?  Is he mad at the kid, is he mad at the commercial?’  ‘No no, he loves the kid; it’s the commercial.’  All these really, really fascinating questions.  Then he started to embody the character a little bit while we were sitting there.  At one point, he stood up on the table and started going, ‘Huuh! Haah! Huuh! Huh!’ — doing these poses.  I was in tears, I was laughing so hard.  I was thinking, ‘Oh, I hope he says yes to this.’  I’m so grateful he did.  Every single recording session we did was so much fun.”

The last of the new characters Cooley touched upon were Ducky and Bunny, and the improv work done by their voice actors, Keegan-Michael Key and Jordan Peele:

“I’ve watched all their shows and their movies and stuff, and I got to see firsthand how they can look at each other and basically mind-read.  We always recorded them together.  They know what the other person’s going to do; they set each other up perfectly.  It’s like watching a magic trick, it’s unbelievable.  I’d give them the structure of the scene, script pages, start there.  They’d improv hilarious stuff, but it was always on point and always served the story.  They really helped create those characters.  It’s them onscreen.”

The article concluded with a quote from Annie Potts, about how special it was to record with Tom Hanks for the new movie:

“I got to work a lot with Tom.  Any day as an actor working with Tom Hanks is a pretty wonderful day.  This new, astonishingly modern Bo Peep and working with Tom — it doesn’t get much better than that.”

Two other images have been shared online in recent weeks as well – I’ve posted them on my social media accounts, but as they didn’t reveal anything too drastically new, I didn’t bother doing a writeup on them.  One of them (which was also included in the LA Times article) is a still of Woody and Bo looking out over the carnival, with Giggle McDimples, like we’ve seen in the trailers. 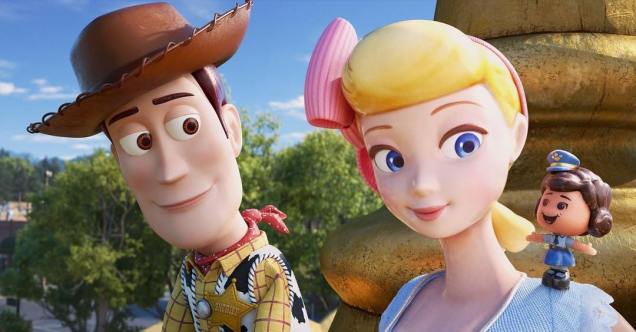 The other one, which was shared by the Brazilian entertainment site Cinemaior on Instagram, is slightly different.  It shows some of the characters – Buzz, Woody, Bo Peep and her sheep, Giggle, Ducky and Bunny – looking down through a window or skylight.

Is this the antique store they’re peering into?  Does this come right before the scene we saw last week of them trying to get past the destructive cat?  The characters present match up, even though we couldn’t see the sheep before.

While it’s always fun to see new screen shots, I do wish we’d get something that wasn’t just more of the same, as far as the scenes they come from.  The details of this movie have been so closely guarded, and there’s still so much we don’t know about the rest of the story.  I don’t expect to see much more, either, unless international trailers show things the US ones don’t in the coming weeks.  At least we’re almost there – only eight more weeks of mystery!

Images © Disney/Pixar.  Many thanks to Priz Lee on Twitter for letting me know this article had been published!