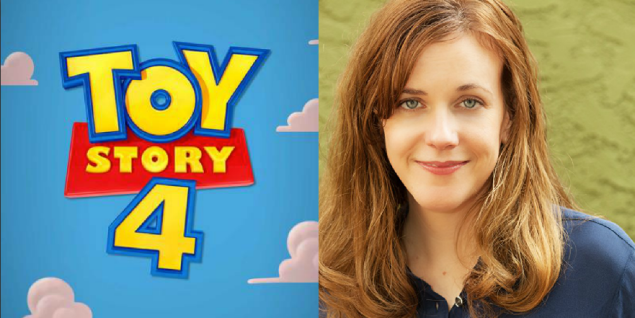 It feels like it’s been forever since there have been any official reports on the progress of Toy Story 4 – the most recent hints being glimpses of work in progress at the D23 Expo this past summer.  The silence was broken yesterday, however, as news came out that Stephany Folsom has joined the film’s team as its new screenwriter.

This update comes nearly a year after Martin Hynes was mentioned by various credible sources as a writer for the sequel last March, although that information was never corroborated by Pixar.  It also follows Rashida Jones and Will McCormack’s departure from the project over “creative differences” at some undisclosed time in the past couple years.

Stephany Folsom is a relatively new screenwriter, and Toy Story 4 will officially be her biggest film to date; although she did apparently do some story work on Thor: Ragnarok that unfortunately went uncredited.  Her best-known script is the unproduced but well-received 1969: A Space Odyssey, or How Kubrick Learned to Stop Worrying and Land on the Moon, and she has done some work on television series as well.  She is also named as writer on a film that is still listed in development,  Missing You, according to iMDb.  Interestingly, the description of this story is that of a woman searching to find her missing husband at all costs.

Deadline’s article breaking the news provided very few details regarding her addition to the Toy Story 4 team, so we don’t know whether this is a recent development, or if Folsom has been writing the script for a while now.  However, replies to her own tweet announcing the assignment suggest that she has been working on the movie for quite some time already.  Comments like “love that it’s finally out in the open” and “cat’s out of the bag” make me believe that she has in fact been involved with Pixar for months, and has reached the point where they’re confident that she’s the right screenwriter for the film and therefore are comfortable confirming it.  If this is the case, it makes sense that they waited to name her officially as the sequel’s writer, so as not to have her role overshadowed by the controversy surrounding Rashida Jones’ exit.

Well, if you’ve been wondering what I’ve been up to lately… https://t.co/THD8KSj0yl

It seems that Pixar likes to work with up-and-coming screenwriters – Michael Arndt only had one film to his credit when he penned Toy Story 3, and we all know how fantastically that turned out.  So I’m optimistic and excited to see what Stephany Folsom will do with Toy Story 4.  Personally, I’m thrilled to see that there will be once again a “strong female voice” – as Pixar originally wanted – in the telling of Bo Peep’s story.

7 thoughts on “A New Screenwriter for ‘Toy Story 4’”