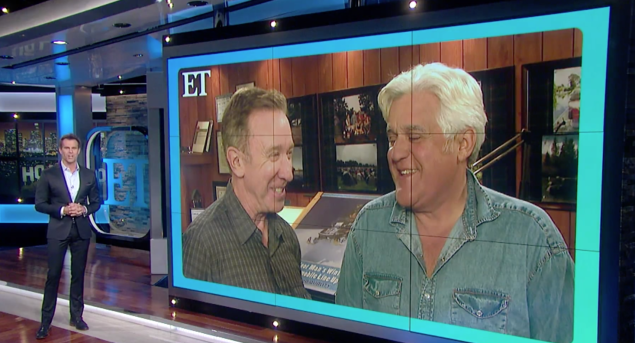 Just when I think Tim Allen is done promoting Last Man Standing, I find something new!  Guess I shouldn’t count that round of exposure out just yet, huh?  This time, it was an ET interview with Jay Leno on the set of the series, and once again, he mentioned Toy Story 4.

There’s new characters; you cannot believe how clever they got, how they expanded the story,  And the last 12 minutes of that thing is beautiful, and wonderful, and emotional, and I literally get choked up.  I can’t tell you how simple it is, but how wonderfully emotional it got.

This statement – while still focusing on the emotional aspect of the film’s ending – seems to put things in what sounds like a much more positive light than some earlier interviews.  Although Allen’s recent remarks about Toy Story 4 have followed the same basic theme and talking points, he does change up the phrasing a little each time.  Until we get something more concrete from Pixar, I’ll take whatever clues I can get!

In other news, I also discovered an article referencing a line of remote-controlled toys being released in the UK for Toy Story 4.  This is the first official announcement I’ve seen for merchandise other than books; and apparently these toys will be sold by Siso Toys UK (Simba Dickie Group) and will be available as of April next year.  Will these just be generic Toy Story toys, with classic characters like RC?  Or is this another hint of a RV road trip aspect of the movie – which was also suggested by the sticker book now listed on Amazon?

We’re just eight months out now, so it won’t be long until we get more frequent updates about Toy Story 4 and all the aspects associated with its release.  Stay tuned!