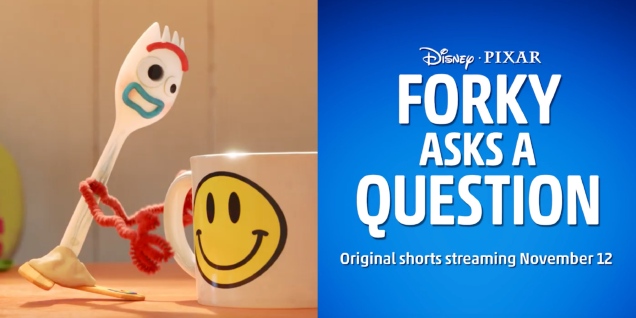 If you thought that you’d be binge-watching Forky Asks A Question this coming Tuesday, November 12… hold yer horses.  It looks like Disney+ will be releasing the episodes weekly, like a true series.

I’m really not surprised, because previous reports had suggested that Disney+ would release the episodes of their series in this manner.  And in a recent review published by Laughing Place, it’s stated that the first Forky episode to be available with the platform’s launch will be “What is Money?”  New episodes will then premiere on Fridays, with “What is a Friend?” on November 15.  That takes us up to January 10, 2020, until all the episodes have aired.  Here’s a brief synopsis of these first two, as shared in the article:

The premiere episode is about money and Hamm is Forky’s teacher.  The layers of comedy keep unfolding as Forky finds follow-up questions to each of Hamm’s answers about how currency works and where it comes from.  The runtime may be short, but the creators have packed a lot of content in the few minutes you’ll spend with Forky each week.

The second episode is about friendship, a concept Forky really doesn’t understand.  He assigns a hilarious name to an inanimate object and it gets funnier every time he addresses it while the other toys look on in disbelief.

I’m wondering if the “inanimate object” is the smiley-face mug that’s seen in the trailer.

Honestly, I don’t mind that these shorts are getting released on a weekly basis.  Because – let’s face it – besides Lamp Life (which we still don’t have a date for), who knows if or when we’ll ever get any other new Toy Story content?  I was thinking it would be a bit of a letdown to watch all of the Forky episodes in one sitting, so new episodes will be something to look forward to, at least for a little while.

With the Frozen 2 hype sadly (for me) drowning out Toy Story 4 as we head into the holiday season, I’m hoping this little series will keep up some of the excitement for the toys, and keep them on the fans’ radar.  Actually, it was five years ago today that Toy Story 4 was announced to be in the works, and I’m just not ready for all the anticipation of new stuff with the toys to be over.  So I’m going to enjoy these next nine weeks with Forky and the gang, and fingers crossed we’ll see more of Bonnie’s toys in the future!