This morning, on Good Morning America, Woody, Buzz, and Jessie were on hand to announce that Toy Story Land will open at Disney’s Hollywood Studios on June 30, 2018!

Since the D23 Expo this past July, all we’ve known was that the new land would open this summer, and most Disney fan sites assumed that it would open Memorial Day weekend like Pandora did last year.  This later date came as a surprise to many, and we are still waiting to hear if there will be any sort of soft-opening previews for Annual Passholders or Disney Vacation Club members.

If you’d like to see the full opening date reveal as it was shown live, you can watch it online here.

Disney has also released some new concept art images recently.  Last week we got a peek at an interior shot of the Alien Swirling Saucers ride in action.  The colorful lighting effects are great, and it looks like it’ll be a lot of fun!

Today, as part of the Disney Parks Blog‘s post about the land’s opening, we got a glimpse of the new entrance for Toy Story Mania.  While I’m happy to see what it’ll look like – my girl Jessie’s right there on the front! – there’s no sign of the Mr. Potato Head audioanimatronic figure that used to interact with guests in the original queue.  It would be a shame if he’s been scrapped completely in the new design. 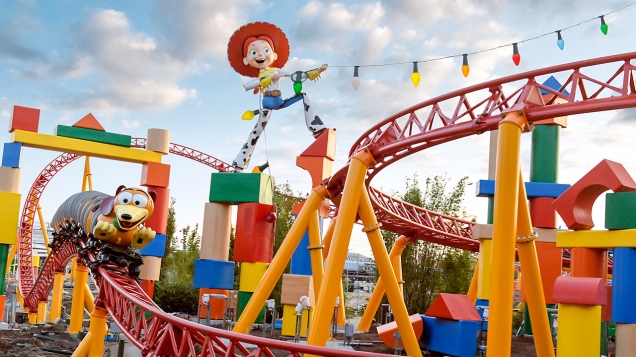 With just four months left until opening day, I hope that we will be getting even more news about Toy Story Land in the coming weeks – like specific details about character experiences in the land, besides just “some of your favorite Toy Story pals” being meetable, as today’s presentation stated.  As always, stay tuned, and I’ll share any new information as it becomes available!