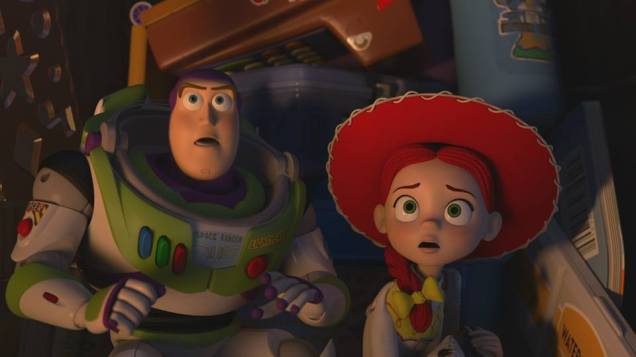 With this week being Halloween, I thought I’d look back at all of two years ago, when
Toy Story of TERROR! made its debut on national TV.  Even though I own the special on Blu-ray – which I bought, of course, the morning it came out, and rushed home to devour all the bonus features – every time it’s shown on television, I can’t help but watch.  It takes me back to October 2013 and the anticipation surrounding its first broadcast.

In the years following Toy Story 3, I was satisfied with the steady stream of Toy Story Toons we were getting.  Shorts like Hawaiian Vacation, Small Fry, and Partysaurus Rex continued to give us glimpses – albeit quick ones – into the toy’s lives with Bonnie.  But news of two half-hour television specials was even better, especially when we found out that Jessie would be the star of the first one.  It was May 2013 when the first details were announced for Toy Story of TERROR!, including that it would be directed by Angus MacLane – who was also the director of Small Fry – and produced by Galyn Susman.  At that time, MacLane gave us a few clues about the story:

“This is the first time that they’ve been on a road trip away from the house, so we’re exploring the relationships and the things that might come up on a road trip with toys, some of whom have lived and worked together for years, while others have only just met,” MacLane says.  “They definitely have a family dynamic that is fun to see now that they’re all together on one road trip.”

Although it was my sincerest fangirl wish at the time, little did I know then that the “exploring relationships” aspect would in fact deal partly with how far Buzz and Jessie had come together since Toy Story 3.  With hopes sky-high, the next five months were spent scouring the internet for updates, much like I’m doing now for Toy Story 4.  As a Jessie fan, knowing it was going to be Jessie-centric made it an especially big deal for me.  The D23 Expo in August 2013 brought some recaps of the first ten minutes, which had been previewed in a presentation; but it wasn’t until closer to the special’s actual premiere on October 19 that the real treats started popping up.  Each review, interview, screen shot, clip, and commercial that was released just added to my building excitement.

An article detailing the step-by-step process of completing a scene, showing exclusive production images, was one of my favorite discoveries, particularly this piece of concept art:

Just look at Buzz comforting her!  Anyway… without a doubt, I was always the most delighted to read about the importance of Jessie to the story.  In this video of a panel discussion, MacLane emphasized why Jessie was chosen as the focus:

“Immediately, I wanted there to be a story about Jessie, because I felt like there was an opportunity there, given her stature in the series.  We knew about Buzz, we knew about Woody, but we didn’t necessarily know as much as we could about Jessie; or we didn’t feature Jessie  as much as we could, given the number of characters, and this was an opportunity to trade on that a little bit, and figure that out.”

And he shared this insight in an article on the D23 website:

“First and foremost, it’s emotionally about Jessie’s journey and revisiting her unfinished fears of being abandoned and being stuck in a box,” Angus says. “She’s overcoming those fears and finding her own voice – becoming the superhero that she can be.”

The night of the premiere, my friends and I decorated my house with cobwebs and streamers and had a viewing party – followed by re-watching the DVR recording of the special countless times.  Now, two years later, I couldn’t even tell you how many times I’ve seen it.  I own all the books that retell the story; a plush Mr. Jones; and a gift set of Buzz, Jessie, and Combat Carl, too.  It definitely made an impression.

Toy Story of TERROR! lived up to my expectations, and then some.  The quality and detail in Pixar’s animation was worthy of a feature film; and their storytelling was brilliant as usual, with a good balance of heartwarming and humorous moments.  But it was Jessie’s role (of course, don’t I always make it about Jessie?) that truly resonated with me.  For one, it was how they portrayed her relationship with Buzz.  The events are set six months after the end of Toy Story 3; and in it you see Buzz and Jessie now established as a couple, his stuttering nervousness gone, and a comfortableness between them.  Buzz is constantly there to support and reassure Jessie throughout her emotional trauma – when she’s trapped in the toolbox, it is Buzz who is first to respond, who holds her hand, and who lifts her out to safety.  Later in the special, after they’ve been separated and are reunited, all the other toys seem to fade away as the pair share a joyful embrace; they are the only two who exist in that moment, and all that matters is that they know the other is safe.  And when Jessie is battling Mr. Jones, the always-protective Buzz is desperate to break out and save her, bringing his own fears into play.  Finally, back in the safety of Bonnie’s trunk, it’s clear how proud he is of his cowgirl’s bravery.  Ever since Toy Story 3, I’ve felt a personal connection to Jessie and Buzz, and to see that Pixar did in fact continue their love story beyond the end of the film, and pictured them as the strong couple that I always imagined they would be, made me then – and still makes me now – too happy for words. 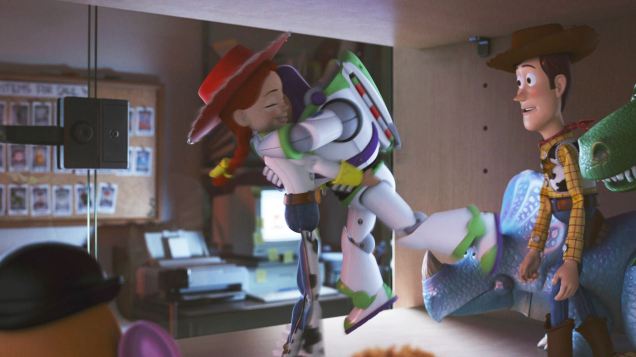 Second, it was wonderful to see Jessie have her own moment to shine, to grow as a character, and to build on her status as one of the main three characters in the series.  Jessie’s anxiety and claustrophobia were dealt with sympathetically throughout, as she works through her fears both independently and with the assistance of her friends (Combat Carl included); and she wasn’t depicted as weak because of her psychological struggles, either.  The fact that she can maintain her characteristic exuberance and spunk in spite of a painful past is one of the qualities that has endeared her to me from the beginning; she’s feisty, and independent, and determined, yet still has a very realistic human weakness.  She’s a fantastic role model for people, like myself, who also deal with anxiety; and a welcome counterpoint to all the poised princesses out there.  (I don’t dislike the princesses at all, I just don’t relate to them in their ballgowned perfection, and I’m sure I’m not alone.)  I know I’ve said it before, but I really hope that the strength and confidence they’ve fostered in her with Toy Story of TERROR! will be further explored in Toy Story 4, because she is a superhero.

So, even if it’s long overdue, I’d like to thank Angus MacLane, Galyn Susman, and the rest for the masterpiece they created in Toy Story of TERROR!, and for giving Jessie her well-deserved moment in the spotlight.  The special has become a beloved classic for my family, and something we go back to watch time and time again, no matter what the season.  As we head into the holidays, and showings of Toy Story That Time Forgot, I’ve got my fingers crossed that maybe, someday, there will be even more of these Toy Story television programs to enjoy throughout the year.  Valentine’s Day would be nice… hey, a fangirl can dream, can’t she?