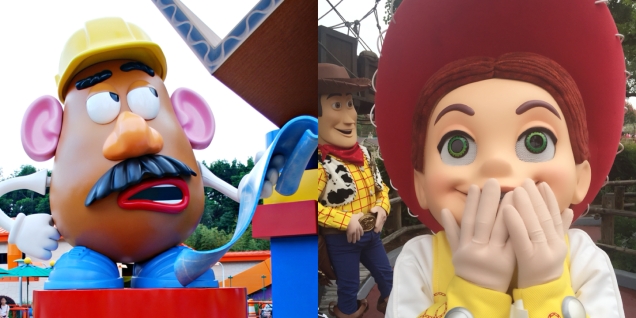 I really want to write a strictly happy blog post – you have no idea how much I would love to write a gushing report about exciting news or some thrilling new development in the Toy Story world!  Unfortunately, that has not been the case so much lately.  I’ve been meaning to post an update on Toy Story Land construction for the past several weeks, but I just wasn’t able to find the time.  Since then, however, another upsetting bit of news has come out of Walt Disney World – and I’m going to need your help on this one, if there’s any chance of making things right…

First off, there is one positive here – after over a year since it was first announced, progress is finally being made on Toy Story Land!  Although we still don’t know what we’ll ultimately see built there, demolition appears to be complete and ground has been broken.  On August 25, WDW News Today posted some fantastic aerial images of the ongoing work at Disney’s Hollywood Studios.  The photo above shows the rectangular plot earmarked for the addition, located behind Toy Story Mania (to the right).  It’s great to see how much acreage it’ll encompass, which provides a lot of potential – if they give Toy Story Land the care and attention to detail it deserves.

It’s clear that there’s machinery at work, moving dirt and getting what looks to be electrical, plumbing, and the earliest stages of foundation work into the ground.  If work proceeds smoothly, we could see actual foundations by the end of the year, and the beginnings of structures going vertical.  Toy Story Land is set for a rumored summer 2018 opening, which would tie nicely into the release of Toy Story 4.

But there always seems to be a catch these days.  I’ve read on the WDW Magic forums that it’s possible the Slinky coaster has been scaled back yet again, with even more reductions than I previously reported about.  And I’ve also heard that one of the things cut from the original plans for the land was the meet-and-greet space, which would have been housed in the now-cancelled Woody’s Roundup section.  I honestly can’t fathom why – when they currently have a meet-and-greet space for Woody and Buzz in Pixar Place – they would not provide something comparable (if not better) in the new land.  I really hope that this decision has been revisited and that some sort of meet-and-greet space for the characters has once again been included in the plans.

Save Jessie – Don’t Let Her Get Cut!

Speaking of meet-and-greets, that’s where the real bad news comes in for Walt Disney World.  Just this week, it was reported by multiple, credible inside sources that Jessie and Woody’s Frontierland meet-and-greet at the Magic Kingdom will be cut as of October 1, to make budgetary room for the new Muppets show being added to Liberty Square.

It’s no secret that I’m a dedicated Jessie fan, so the loss of her from the parks saddens me deeply, and this news has been extremely difficult for me to process.  Visiting with Jessie has been one of the most cherished highlights of my family’s vacations, for many years.  Sure, as of now she can still be seen in the “Move It! Shake It! Dance & Play It!” parade at the Magic Kingdom, and both she and Woody are scheduled to be in the new stage show during Mickey’s Very Merry Christmas Party this year.  But that’s not the same as spending time with the characters in a more personal setting, one that gives you the chance to hug them, joke around, and take photos.  My family and I visit Walt Disney World several times a year, for at least a week each trip, and every time we’ve gone to meet Jessie and Woody (on multiple days) they have had a significant line.  They are still very much in demand, and it makes no sense to remove them from greeting guests on a daily basis, when Toy Story has such a sizable fan base spanning generations. 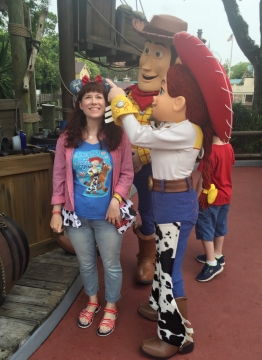 Woody is available to meet in another park – in the above-mentioned meet-and-greet location in Pixar Place at Hollywood Studios – but if Jessie gets cut from Frontierland, she will no longer be meetable anywhere on Walt Disney World property.  To me, this is completely unacceptable.  Too often, the Toy Story franchise is represented by only Buzz and Woody, which isn’t accurate to the film series as it has evolved over the past 20 years.  Jessie was created by Pixar to be a strong female lead in that world, and to be a positive role model.  Girls need Jessie.  There desperately needs to be other Disney girls represented – and meetable – in the parks.  Not all little girls relate to princesses – even Minnie Mouse, Daisy Duck, and Tinkerbell can be considered “girly” – therefore, Jessie’s presence is very important.  In light of her starring role in the Toy Story of Terror television special, and with Toy Story 4 coming to theaters in less than two years, how is it right to remove her from greeting guests?  If television characters can be celebrated in the present-day Walt Disney World (such as Elena of Avalor), how does Jessie not deserve the same level of prestige?  She is recognizable, and popular, and would be sorely missed by many people.

If, due to budgetary or other reasons, Jessie must be taken out of the Magic Kingdom, then she needs to be relocated elsewhere – for regular, daily appearances, not a once-in-a-while, rare character exclusive at ticketed events.  There is absolutely no reason why she couldn’t and shouldn’t be added to the meet-and-greet in Pixar Place at Hollywood Studios, along with Buzz and Woody.  If Disney can afford for a group of Green Army Men to mingle with guests every single day, why doesn’t Jessie deserve to be there too (even more so)?  I know that she appears with Buzz and Woody at Disney California Adventure, on rotation, and she certainly could be incorporated into something similar at Hollywood Studios.  And while it is not a US park, and I realize it may be managed somewhat differently, I know she meets with them at Hong Kong Disneyland as well.  The precedent has been set at other Disney resorts, and should certainly be met – if not exceeded – at Disney’s largest, flagship resort.  With Toy Story Land now under construction, ALL the main characters should be visibly promoted, together – both now and once the land opens, with a proper meet-and-greet there. 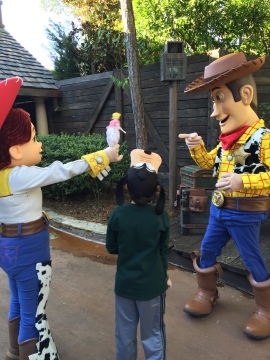 This is where I need help from my fellow Toy Story fans.  Please, go on my Twitter and Tumblr, and like, retweet, and reblog my posts.  Comment on my Instagram post about the issue.  Post your own social media protests, direct them at the official Walt Disney World accounts, and use the hashtag #savejessie.  And even better, contact Walt Disney World directly!  Tell them the decision to remove Jessie from meet-and-greets is not okay.  Here are some contacts to get you started, with complaints being sent to the attention of the Entertainment department relating to characters in the parks:

This decision needs to be fought, and fans need to have a voice.  A character meet-and-greet seems like such an easy thing to either keep or relocate, yet instead Walt Disney World is making the choice to take it away, just to save a few pennies.  Meeting these characters has become a well-loved tradition for my family, as I’m sure it has been for many others, and the absence of Jessie in the Florida parks would be palpable.  She shouldn’t be someone you can only wave at from a distance on a parade float, or watch on a stage; she needs to be accessible to girls both young and old alike who see themselves as more of a rowdy cowgirl than a poised princess.  Regardless of whether it’s at the Magic Kingdom or Hollywood Studios, Disney needs to reconsider their decision to remove her completely, and reinstate Jessie to greet guests somewhere on property, on a daily basis.  She deserves a presence worthy of the classic, exemplary Disney/Pixar character she is, one who continues to stand the test of time.

Jessie never gives up.  Jessie finds a way!  Please help me fight this crusade to keep Jessie in the parks where she belongs!