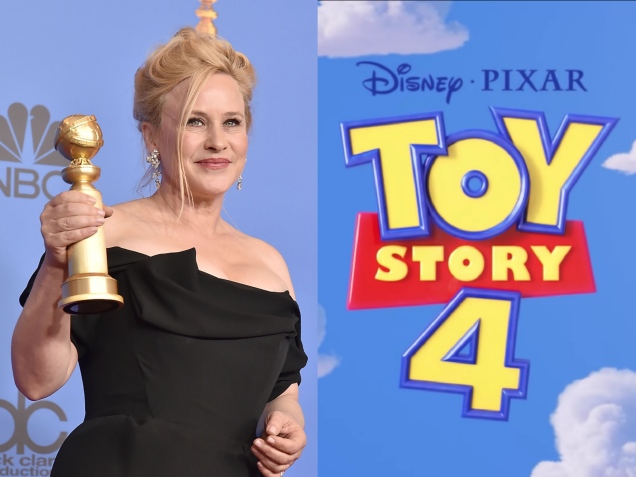 Last night, during a red carpet interview before the broadcast of the Golden Globe Awards, Patricia Arquette confirmed that she’s voicing a role in Toy Story 4 – something that has been rumored (but never officially announced) since 2015.

In a video from Entertainment Tonight, which can be watched here (it’s not on YouTube for me to embed, at least not as of yet), interviewer Lauren Zima asks Arquette about the upcoming sequel; and although she doesn’t reveal much, the intriguing aspect of her remarks is in her tone and expression:

Are you excited for people to see the movie?  I mean, what’s the reaction going to be?

[Places hand to chin in a devious gesture and speaks slowly for emphasis.]  I’m very excited about Toy Story 4.  That’s all I have to say.

I would assume that the character she was reported to be in talks for over three years ago – “a laid-back mom, who’s described as a hippie,” as stated in the original article – will still be part of the plot, as I would doubt that they’d cast her for one role and change it to another halfway through production.

Now that we know this character has remained with the rewrite, what does it mean for the story?  Where will the toys encounter this hippie mom?  Will she have something to do with Bo Peep’s situation, and where she is encountered?  Will she be at the carnival, or the RV park?  And, judging from the inflections in Arquette’s voice, will she turn out to be the villain?  A female villain would be a first in the Toy Story series.  No matter who her character turns out to be, it’s nice to finally have this question of Arquette’s involvement answered after such a long time!